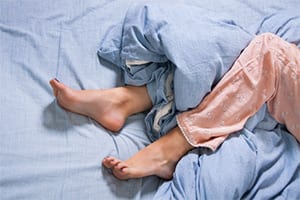 Restless legs syndrome is often felt most strongly in the evenings or at night. Often there is an almost overwhelming urge to move about and be active. The feelings seem to be deep within the legs often between the knees and ankles.

Symptoms can be worse after periods of inactivity such as sitting in a meeting, cinema or car for long periods of time. RLS can also run in families although it seems there are contributing factors such as low iron levels, diabetes, and other physical ailments and certain medications can worsen the condition. Symptoms may be a result of some other medical condition so ensure you consult the advice of a medically qualified professional if you suspect you may be suffering from this condition.

Some commonly prescribed behavior patterns such as increased daytime exercise can sometimes alleviate evening and night time symptoms. Also alcohol, caffeine and sometimes tobacco can aggravate things and should be used minimally or cut out all together.

Restless legs syndrome and the mind

Although RLS is a neurological disorder it is now beyond any scientific doubt that the mind and body are deeply interconnected. Hypnosis is nature’s tool for influencing physical processes through the power of the mind and this session is designed to ease RLS while giving you a pleasant, deeply relaxing experience.

Download Ease Restless Legs Syndrome below and see how it works for you.

50% off Selected Self Hypnosis Audio during lockdown

Get FREE Uncommon Fear And Anxiety tips in your email

Sign up free using the form below to overcome fear and anxiety:

Not sure if hypnosis is right for you?