How to Live With Uncertainty More Comfortably 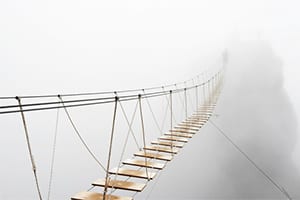 Can you walk? Can you ride a bicycle? Can you roller-skate or ice-skate? Can you swim?

If you can do any of these things, you probably no longer think very much about how, exactly, you do them.

They are automatic behaviors you mastered a long time ago. It doesn’t occur to you on a daily basis that when you walk along the street you are ‘living with uncertainty’.

And you are probably quite relaxed about it.

Walking – from stability to instability – and back

But stop and think about that for a moment.

While all that is going on, you are also adjusting the balance of torso, head and arms.

So walking is just constantly falling (and risking getting hurt) but then catching yourself before you hit the ground.

You can remind yourself what is really going on by standing up and then starting to walk really really slowly, paying attention to what each muscle and joint is doing and feeling.

It feels odd, and don’t be surprised if you actually fall over trying to do it! It’s like going back to being a baby learning to walk – that is, learning how to remain stable and still move safely through an uncertain world.

The illusion of certainty

Although we have all been through this experience, and similar ones like learning to ride a bike or skate, once we have mastered the skill we take it for granted. We have the illusion that we are ‘in control’.

But what we are really doing is making constant subtle adjustments to the constantly changing world. You don’t actually keep your bicycle upright. You sway from side to side, using the forward motion to help you return to stability.

The effect of anxiety on our ability to respond to uncertainty

As we master more and more of life’s skills, the illusion of control can become quite powerful, so much so that we begin to ‘expect’ to be in control.

We start to feel uncomfortable and anxious if we have to make decisions in circumstances where we feel we ‘don’t know what’s going on’.

And when we feel anxious, it actually becomes harder to respond appropriately to circumstances, and then we feel even less in control.

The Catch-22 of ‘being in control’

It’s as if we’re caught in a Catch-22 of our own making. Catch 22* is a brilliant satirical novel by Joseph Heller whose comedy (and tragedy) turn upon the ‘double binds’ that people find themselves in.

A ‘double bind’ is a situation where there are two options, but no matter which you choose, you lose. And there is only one way out of a Catch-22 – you have to see through it.

But the trouble with illusions is that they appear opaque to us – that is, we are quite convinced that they are real and solid and unquestionable. So telling us to just ‘see through it’ doesn’t help much. Will power isn’t much help either. You can want to see through it all you like, but if it looks real to you, it looks real, and you will respond as if it is real.

Does this mean that, once you are caught in the illusion of control, you can never escape from it and learn to live at ease with uncertainty?

Using the unconscious mind to learn to live with uncertainty

To see through an illusion, you look not at the illusion itself, but at the source of the illusion. That is, you look to what we call the ‘unconscious’ mind.

The power of the unconscious to create and destroy illusions has been known for centuries, but in recent times research into the functions of brain and mind has led to the development of powerful techniques for accessing and utilizing this power in beneficial ways – hypnosis.

Living with Uncertainty is an audio hypnosis session which uses the power and range of hypnosis to help you rediscover how to be more at home with the uncertainty of the world – while still keeping your skills of adjustment.

This gentle, permissive hypnosis session will take you into a state of profound relaxation. This process in itself reduces anxiety and tension in the body and mind, thus making it much easier to see ‘the bigger picture’ around the life challenges you may be facing.

At the heart of Living with Uncertainty is a powerful transformational metaphor – a story with many levels of meaning. As you listen repeatedly you will understand more and more how the messages in this story apply to your life and circumstances.

You will find yourself feeling much more relaxed about all the things that are outside your control, and confident about taking action on the things that you can influence.

Download Living with Uncertainty now and discover a new way to be in control. You can listen on your computer or device or via our free app which you can access when you have completed your purchase.

Note:
* From Chapter 5 of Catch-22, by Joseph Heller (New York, 1961, Simon & Schuster)
There was only one catch and that was Catch-22, which specified that a concern for one’s safety in the face of dangers that were real and immediate was the process of a rational mind. Orr was crazy and could be grounded. All he had to do was ask; and as soon as he did, he would no longer be crazy and would have to fly more missions. Orr would be crazy to fly more missions and sane if he didn’t, but if he was sane he had to fly them. If he flew them he was crazy and didn’t have to; but if he didn’t want to he was sane and had to. Yossarian was moved very deeply by the absolute simplicity of this clause of Catch-22 and let out a respectful whistle.
“That’s some catch, that Catch-22,” Yossarian observed.
“It’s the best there is,” Doc Daneeka agreed.

Be Your Best Self

Get FREE Social Confidence tips in your email

Sign up free using the form below to get your first social confidence tip instantly: